Let’s take a look on visualization of processor with four cores.

Means that some processes can genuinely run simultaneously as they run on separate cores, in other words the amount of cores you have on your processor is the amount of things that can happen at the exact the same time.

So as on the image above we have four cores, that means at any point in time we can do at most four operations at the exact same time and these operations are really low-level computation operations.

But as you can imagine, our computer do more than four operations… Its possible thanks to threads and multiprocessing.

Is essentially a one program, a set of operations that need to be processed.
Every thread is going to be assigned to one core, so each of cores will have a bunch of threads that they’re going to be executing and switching between which ones they perform operations on.

Let’s take a look on analogy to concurrency and parallelism. 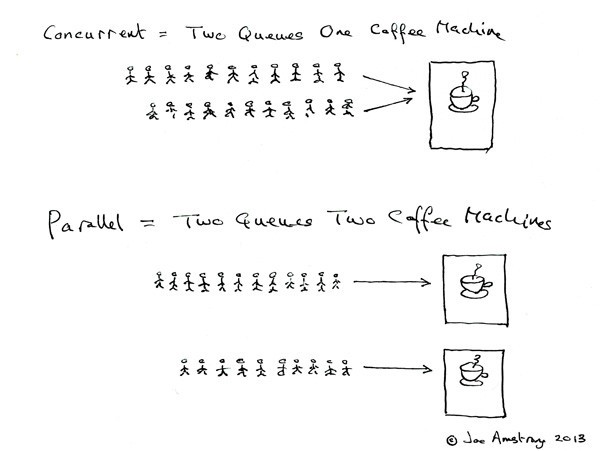 Concurrency means that many threads are waiting to be processed by the CPU core, however, when the thread is being processed by the core, it doesn’t mean that it will run until it finishes. I mean it may run on the same core and stop many times before it finished its job. Because the thread may hang, stop, or basically doesn’t need to be executed at the current time, the processor core can execute another one when the previous one is waiting.
Its describes what concurrency means, not when things run in parallel at the same time but when we’re doing things in different timing sequences, so we can have multiple threads running at the same time and our CPU core that we’re running their threads on is switching between these threads in its execution chain.

There is also thing called clock speed of processor, e.g. 2.6-Ghz. So each core in processor can run with speed of 2.6-Ghz, which basically mean that each core can run 2.6 billion instructions in a second.

In object-oriented paradigm, Coupling refers to the degree of direct knowledge that one element has of another. We may generally divide coupling to tight and...