we have class that store data about books, well but except that we could storing the information, we coudnt do much more. Let’s add a print method. Now it is possible, However this code violates the single responsibility principle we outlined earlier. 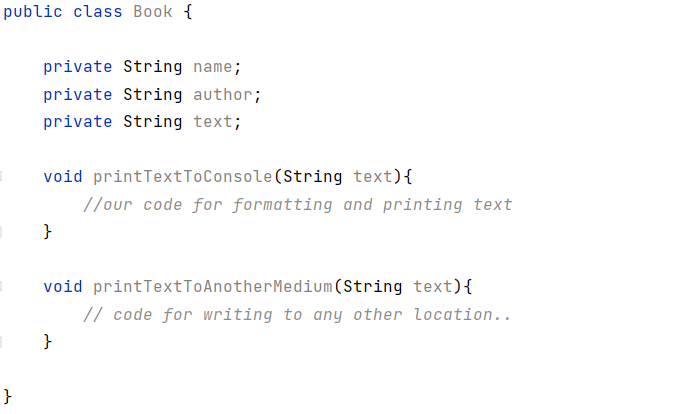 To fix that class to be in accordance with the single responsibility principle we should create separate class that deals only with printing our informations about book.

It is a example but wheater its a logging, validating, email or anything else, we should have a separate classes dedicated to this one concern. Simple as that. Don’t worry about the fact that you will have more classes. Now its easier to read, refactor and maintain. Trust me you wouldn’t like to work with classes with few thousands lines.

Open-closed Principle (OCP) states: Objects or entities should be open for extension but closed for modification.

The code should be written in such a way that in the case of the development of the system and the emergence of new business requirements, there is no need to change the existing code. If a single change causes a lot of changes to dependent modules, then this is a design that is difficult to change. The OCP principle says that the program should be written in such a way that the changes introduced in the project do not cause further changes. When this principle is respected, we add new code, but do not change the existing one.

We will create separate class for every different way of logging. The first class will be the Console Logger class, which will log messages to the consoles.

The second class FileLogger will log data to file.

Robert C. Martin summarizes it: Subtypes must be substitutable for their base types.

Barbara Liskov, defining it in 1988, provided a more mathematical definition: If for each object o1 of type S there is an object o2 of type T such that for all programs P defined in terms of T, the behavior of P is unchanged when o1 is substituted for o2 then S is a subtype of T.

Lets look at an a bad example.

The hawk can fly because it is a bird, but what about this:

Ostrich is a bird, but it can’t fly, Ostrich class is a subtype of class Bird, but it shouldn’t be able to use the fly method, that means we are breaking the LSP principle.

We have added method compete and also some extra methods like highJump, longJump and swim. Suppose that John Smith is a proffessional swimmer. By implementing the Athlete interface we have to implement methods that John will never use like high or long jump. 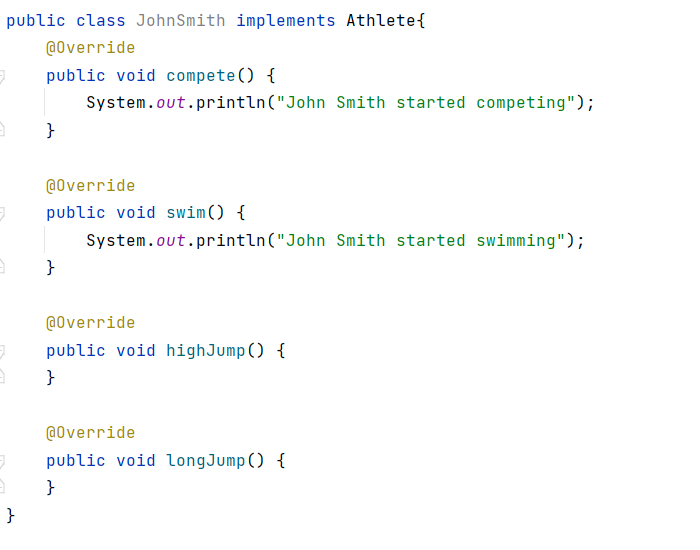 We will follow the interface segregation principle and refactor the original interface:

Then we will create two other interfaces — one for Jumping athletes and one for Swimming athletes.

And therefore John Smith will not have to implement actions that he is not capable of performing: 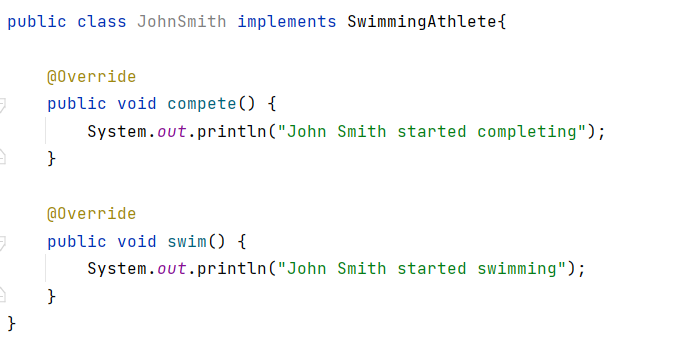 Suppose that John Smith is a swimming athlete. By implementing the Athlete interface, we have to implement methods like highJump and longJump, which John Smith will never use.

To understand the motivation behind the DIP, let’s start with its formal definition, given by Robert C. Martin in his book, Agile Software Development: Principles, Patterns, and Practices:

Consider the example of an electric switch that turns a light bulb on or off. We can create two classes to make it work. LightBulb class first.

In the class above, we wrote two methods, turnOn() and turnOff().

The second class is a ElectricPowerSwitch 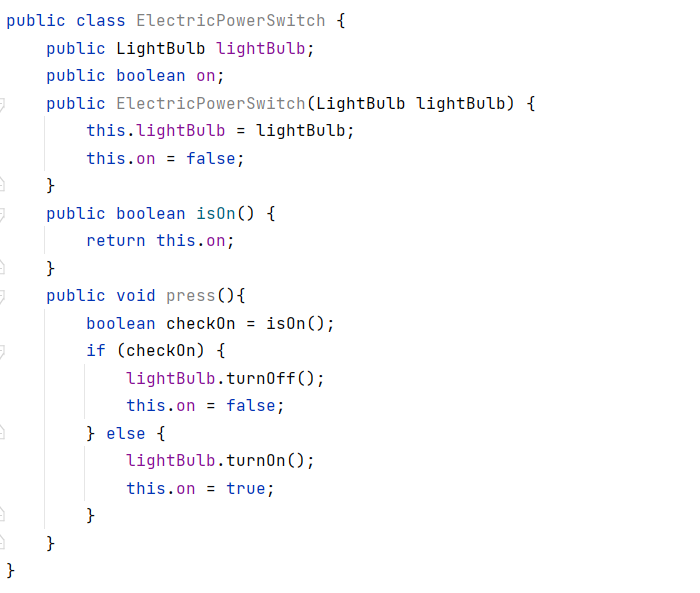 Our switch is now ready to use, to turn the light bulb on and off the light bulb. But the mistake we did is apparent. Our high-level ElectricPowerSwitch class is directly dependent on the low-level LightBulb class. if you see in the code, the LightBulb class is hardcoded in ElectricPowerSwitch. But, a switch should not be tied to a bulb. It should be able to turn on and off other devices too, say a fan, an AC, or the entire lightning in our backyard.

Now let’s change it to conform to the DIP principle. To do that we need an abstraction that both the ElectricPowerSwitch and LightBulb classes will depend on

We wrote an interface for switches with the isOn() and press() methods. This interface will give us the flexibility to plug in other types of switches, say a remote control switch later on, if required.

Next, we will write the abstraction in a form of an interface called Switchable with the turnOn() and turnoff() methods.

That interface allows any switchable devices in the applicationto to implement it and provide their own functionality. Our ElectricPowerSwitch class will also depend on this interface, as shown below 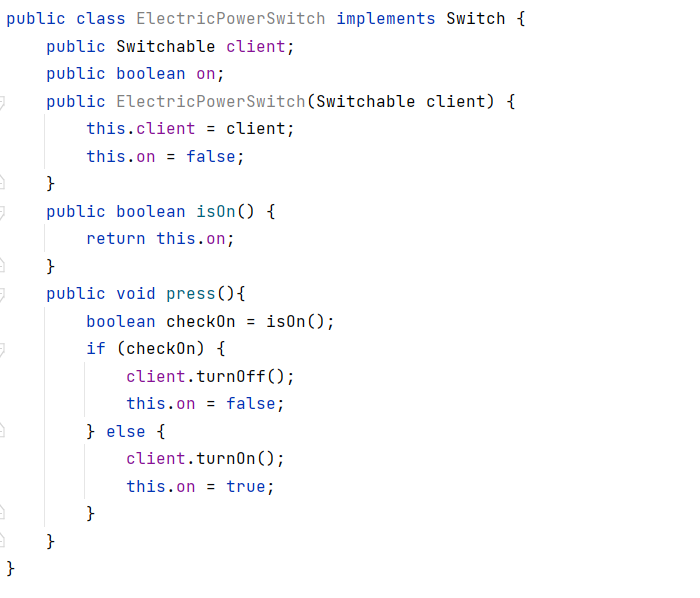 In the ElectricPowerSwitch class, we implemented the Switch interface and referred to the Switchable interface instead of any specific class in the field. We then called the interface’s turnOn () and turnoff () methods, which will be called at runtime on the object passed to the constructor. Now we can add low-level switchable classes without having to worry about modifying the ElectricPowerSwitch class (Remember about Open-closed Principle). Let’s add two such classes.